The story of the “Figlie del Coro” (the daughters of the choir), an example of the impact of valued social roles (pages 56 to 64).

In a book (well worth reading) about specialists vs generalists, the author, Epstein, recounts the marvellous story of a Foundling Hospital in Venice, the Ospedale della Pieta, where infants were abandoned into the care of “the Consorelle di Santa Maria dell’Umiltà, ­(who) established this charitable institution for orphans and abandoned girls in the fourteenth century. By the seventeenth and eighteenth centuries the Pietà – along with the three other charitable Ospedali Grandi – was well known for its all-female musical ensembles that attracted tourists and patrons from around Europe” (Wikipedia). 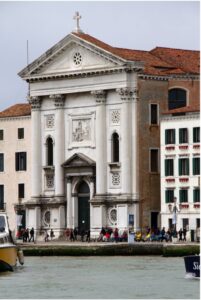 As in many cities around the world infants were abandoned to “baby hatches,” (scaffetta in Venice), mostly by the poor and women in the sex trade. These children abandoned by the poor and devalued people of society were at great risk of ongoing harm and death  The signs of devaluation abounded. “… most of the foundlings would never know a blood relative, and so they were named for their home: Anna Maria della Pieta. An 18th century roster lists Anna Maria’s de facto sisters: Adelaide della Pieta, Agata della Pieta, Ambrosina della Pieta, and on and on, all the way through Violeta, Virginia, and Victoria della Pieta” (p. 59). This was of course the 18th century, many children were orphans: many women died in childbirth and many young men died at war and in work related accidents. It is said that at the end of the 19th century there were 25,000 children in the orphanages of New York City. This is a period of time we’re the only kind of services available we’re usually congregate in nature with very little funding if any from government. Orphanages were run on donations and in Europe in particular by religious orders and other benevolent societies, and income generated by commercial activities.

One can imagine that the conditions in these hospitals was of varying quality, but in Italy and Venice specifically at the Ospedale della Pieta, conditions seemed to have been very beneficial. The orphanage was run like a very busy boarding school and education was taken seriously. “The children were taught to read, write, and do arithmetic, as well as vocational skills. Some became pharmacists for the residents, others laundered silk or sewed ship sales that could be sold. The ospidali  were fully functioning, self-contained communities. Everyone was compensated for their work, and the pieta had its own interest paying bank meant to help wards learn to manage their own money. Boys learned a trade and joined the Navy and left as teenagers. For girls, marriage was a primary route to emancipation. Dowries were kept ready, but many wards stayed forever.” (Epstein, 59 – 60).

An important part of these orphans’ education was music and playing musical instruments at least in Venice. The Ospedale della Pieta made long-term investments in purchasing expensive musical instruments for its wards, and hired professional musicians to come in and teach the students. A number of the orphanages in Venice had orchestras and the finest was the Ospedale della Pieta’s all woman orchestra.  It was reputed to be one of the best orchestra’s in the World.

In 1703 the orphanage hired Antonio Vivaldi, the red priest (because of his red hair), to be the music teacher and lead the orchestra. Vivaldi was to become one of the greatest composers of his era, and he developed the concerto form of music which highlights a virtuoso playing of a single instrument in response to a full orchestra. He is best known for his masterpiece – the Four Seasons. The concerto required virtuoso players and he trained his charges to become very adept musicians. Vivaldi directed the music program, for over 20 years, and he tried out many of his musical innovations on his remarkable orchestra.

In an era when very few women played musical instruments or knew anything about music, and certainly did not perform in public, the orphanages’ music program was quite revolutionary. Indeed, most women of the era (valued or devalued) received very little education.  Vivaldi’s orchestra of women was not only very good but was perhaps the best orchestra in Europe with a renown that went way beyond the frontiers of Venice and Italy. Famous people would come from afar to listen to them play: Mozart, Jean-Jacques Rousseau, royalty and the nobility, and the famous. One could hear them play, however one could not see them play, it just wasn’t proper for women to be seen performing in public, so the orchestra would play behind a screen. Some of the visitors like Rousseau pleaded for the opportunity to see them play and to their great disappointment when the veil was raised, they found that many of the women had been disfigured by disease – the pox and syphilis – and some of the women were old. They had imagined that the women would be as beautiful as the music they created. 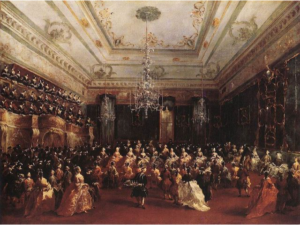 There are a number of things that are noteworthy of the Ospedale della Pieta story: many of the women were virtuosi of many musical instruments, whereas even today students are encouraged early on to become proficient at one single instrument. But Vivaldi encouraged his charges to learn as many instruments as they could and to become virtuosi. During performances women would play different instruments as required. And when a performer could no longer play one instrument they could fall back on another. “Vivaldi wrote Oboe parts specifically for Pelegrina [one of his star pupils], when in her 60s her teeth fell out, abruptly ending her oboe career. So she switched back to the violin, and continued performing into her 70s” (p. 62.) For many of the women music became a longstanding, indeed lifelong activity and valued role. It also generated income for the Ospedale.

Some of the women went on to illustrious careers. Famously Anna Maria della Pieta had music written for her; she played the cello, oboe, lute, mandolin, harpsichord, and Viola d’Amore.  Anna Maria wrote music and performed for more than 60 years. She was dubbed maestra at age 24 and attained the leadership roles of master of the violins and master of the orchestra. It seems that she performed across Europe but the orphanage remained her home throughout her life. She was also called Anna Maria dal Violin and died aged 86. Wikipedia lists 10 women musician-orphans who were trained at the Ospedale and who went on to international renown.

It is intriguing that these 18th century women were attributed valued social roles that crossed gender boundaries: they went to school, learned to read, write and count, became musicians, virtuosi, and a few gained notoriety as great musicians and composers. Some of the women eventually married whereas others lived their whole lives at the orphanage, a good life compared to the alternative. In reading this story I recalled William Tuke, the York Retreat his “moral treatment,” which occurred about a Century later. Vivaldi was not only a musical trend setter but also a human service innovator.